Section Menu
About us

This is a school that values its long history and looks to the future with excitement and anticipation. 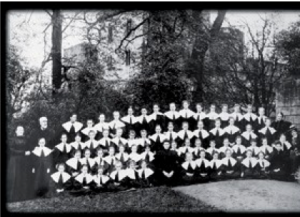 This photo was taken for the Centenary in 1908. Pupils were assembled ready to go to the Barbican to be a guard of honour for the arrival of Edward VII and Queen Alexandra on their visit to Alnwick Castle that year. Mrs Selburn was Headmistress at that time. Mrs Brundell was on the staff.

In 1808 the Duchess Julia founded a small school for twenty girls in one of the Duke’s houses in Walkergate. By 1820 the numbers had grown to fifty and the school moved to larger premises in Canongate where it remained until 1888.

The school then moved into the Bailiffgate building. It was an entirely private school until 1903 when it was recognised by the Northumberland County Council as a County Secondary School.

The school continued to expand and as The Duchess’s Girls’ Grammar School it moved in 1965 into its fourth home, newly built premises on Howling Lane. 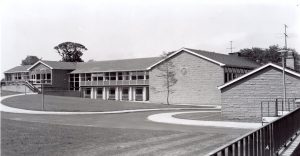 Numbering some 940 students, the comprehensive high school occupied both the modern building on Howling Lane and the former premises at Bailiffgate which had gained additional facilities during the time it was occupied by the students of Alnwick Training College.

The school continues to have a close association with the castle. Until 1988 Her Grace Duchess Elizabeth was Chairman of the Governors of the school and in relinquishing that position she continued to serve as a Governor, attending annually a wide range of functions and activities until September 2005. In 2000 the school was designated a Technology College under the Specialist Schools programme. This has allowed us to expand our curriculum opportunities and bring in ICT resources that have benefited our students significantly.

In 2003, 2007 and 2012 we were recognised by Ofsted as having significant strengths. Not only were we congratulated for the teaching and learning on offer but also for the extremely positive relationships that existed between staff, students and parents. In 2004 we were re-designated as a Technology College. Because of our achievements in this area we were able to apply for a Second Specialism of Music and English College as well as continuing to offer Technology. We also became a Full Service Extended School. This brought huge rewards to the Alnwick Partnership of Schools and its wider community.